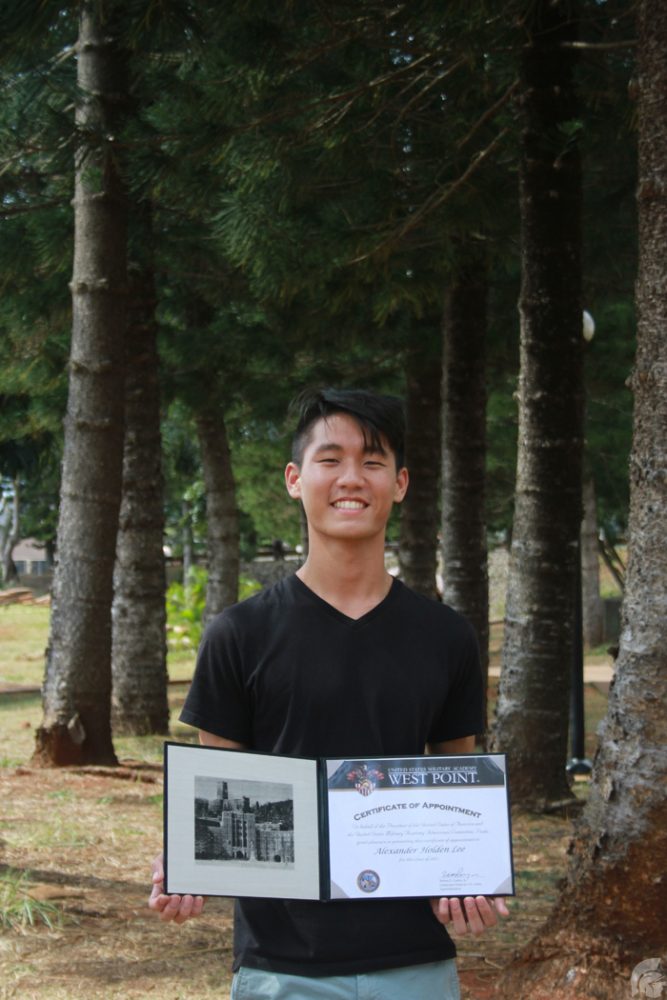 Cadet Lt. Col. Senior Alexander Lee has recently been accepted to the United States Military Academy in New York, more commonly known as West Point. The academy is extremely prestigious, and regarded as one of, if not the best, miliary academy. To garner acceptance, Lee had to get a recommendation from Hawaii State Senator Brian Schatz, pass a physical and eye exam and score high on standardized tests.

“In (Junior Reserve Officer Training Corps) JROTC they teach you about the seven army values: loyalty, duty, respect, selfless service, honor, integrity and personal courage. All these are necessary for anyone to be a good citizen. But selfless service stands out to me because giving yourself to others will always be more fulfilling,” explained Lee.

Lee has been a part of the JROTC program from the beginning of his freshman year of high school, where he built the skills necessary to apply for West Point. “For any service academy, it is a long process. Most of the time the process starts in the final quarter of your junior year in high school when the application first opens up. From there you need to work on getting the highest possible standardized testing scores you can,” stated Lee. “The biggest thing is that you need a nomination from the President, Vice-President, State Senator, State Representative or JROTC unit. You need at least one to get considered. You also need to pass a physical fitness test, which consists of events such as push-ups and sit-ups. You also need to be medically qualified. They make you take a physical and an eye exam.”

To be selected as Senator Schatz’s principal nomination, Lee had to demonstrate an extraordinary character among other applicants. “What sticks out about (Lee) is his eagerness to understand. Some people give up when something doesn’t make sense to them, but (Lee) will make the time and put the work in to increase his knowledge. (Lee) is very industrious. When he puts his mind to something he makes sure to get it done. I think what motivates him is his drive to succeed,” stated Senior Christian Schneider. “What sticks out to me about (Lee) is his work ethic. Whether it be in school, sports, or other extra curriculars, (Lee) knows how to get things done. He gets things done quickly and efficiently. He also has high energy, which allows him to tackle any problems at hand,” added Cadet Cpt. Junior Timothy Schiller Jr.

Lee has fully dedicated himself to MHS’ JROTC program and it has continued to be a big part of his high school career. “My older sister introduced me to the program when I was a freshman. I have stayed in the program since then. (Previously), I had no idea what JROTC was,” explained Lee. “I’ve known (Lee) for about three years now. I first met him when I was a freshman. I remember the first time I met him, I was amazed by his leadership skills and his caring for others. I have gone on many outer island trips with him as part of being in JROTC. Also, I have served under him when he was the Battalion Commander and the Executive Officer for the Staff,” Schiller Jr. elaborated.

At West Point, both Lee and his peers have high expectations for his success and his future career endeavors. “(I’m a little worried about) the amount of difficult work that they give out. At West Point they require you to take certain types of classes each year and the quality of a West Point education is up there with the Ivy Leagues. Again, working on my time management will help a lot because it will allow me to work on all my homework and get help if needed,” expressed Lee. Schiller Jr. added,“Now that (Lee) is accepted into West Point, he is focused on being the best cadet he can possibly be at West Point. At the Academy, I expect him to graduate on time with honors, as well as compete on a Division One NCAA team, because of his exceptional athletic ability.”

Lee’s transition from MHS freshman to senior has been marked by an increased level of knowledge, maturity and accountability. “At the beginning of his high school career, (Lee) was unsure of what he wanted to do. The idea of going to a service academy was always an idea, but never a reality at the time. By the time (Lee) became a senior in high school, he realized he was destined to become an officer in the United States military, like his father,” said Schiller Jr. “He went from someone who didn’t do too well in school to a hard working student that gets mostly A’s and B’s. I expect him to do extremely well at the academy and live a successful life,” added Schneider.

Although Lee does not know which field he plans on going into after graduating from the academy, he will work hard in order to uphold the West Point name, while continuing to represent MHS in New York.