Trojan of the Month: Fuiava Plays for Family and a Higher Purpose 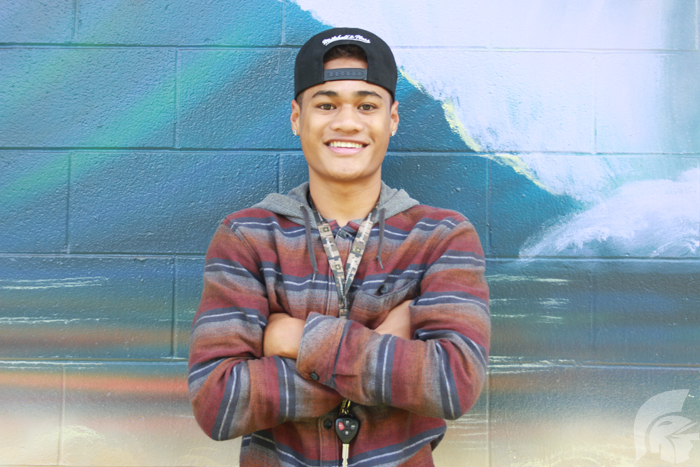 With a passion for sports and love for his family, boys varsity volleyball outside hitter Senior Sila Fuiava received the title of Trojan of the Month (TOTM). Juggling volleyball, academics and relationships with friends, Fuiava is grateful for the support he receives from his family and stands strong behind his beliefs.

“My motto in life is, ‘Nothing is free,’ (and) that is true because everything in life, you have to work for. I’m religious and I believe in God. I pray to God for guidance throughout my life and I play for him and my family,” stated Fuiava.

Growing up, the passion and dedication Fuiava applies to the sport derived from his family, who has played a key role in his life. “My family has supported me the whole entire way in everything I did. I respect them because they let me choose what sports I wanted to play when it got to high school and from there I wanted to strive more in volleyball and they supported me the whole entire way. They supported me financially, buying all my gear and supporting me with genuine love,” expressed Fuiava.

Starting from a young age, Fuiava played an array of sports, unknowingly preparing himself to be the star athlete he’s become. “When I was younger, I never thought I would have ended up playing volleyball because I was a multi-sport athlete in baseball, basketball and football. What made me play was my family because they said if you can jump that high then I would love volleyball, and the first day I ever tried out for the team it was super fun and that was only the first day. After that, I fell in love with the sport so I continued to strive in it,” explained Fuiava.

Throughout Fuiava’s volleyball career, he obtained skills crucial to the game that not only enhanced his performance on the court, but outside the court as well. “A skill I learned from playing sports is that being a team really matters. If you do not have a steady team foundation with individuals here and there, then it can really affect the team. Another skill that I learned as a team is chemistry because knowing your teammates on the court can help your team be much more successful,” Fuiava said.

The process of determining the TOTM is difficult, as student athletes are chosen based on their impact to the game and their character. “(Fuiava is a) team leader, very humble, hard working and respectful, (and an) impact player for (a) team that is 7-0,” explained Sports Director Glenn Nitta. “(Fuiava) is our O1, starting outside hitter. He makes the game look so easy. He’s able to put the ball down with such ease, whether it be a big kill or a roll shot. He is also the emotional leader on the court. Sometimes during the timeouts, I let him speak because I have that much trust in him now to lead the team. The players respond to him and respect (him) and that’s attributed to his hard work and commitment,” added Head Coach Trenton Niino. “One of the reasons that (Fuiava) stands out from the rest of the players is his experience of the game and his high volleyball IQ. He is a very well-rounded player who cannot only terminate the ball, but can play defense as well. When (Fuiava) is hitting, he is able to read the block and read the defense, and while he is on defense, he’s able to read the hitter.”

Evaluating yourself in your sport and classroom are essential in determining whether or not skills, such as leadership, are being put to good use. “I feel like (Nitta) chose me because of my character not only on the court but also off the court. I like to help my teammates out with things besides volleyball. To me being a true leader is being capable of guiding the team towards the same goal and guiding them individually,” stated Fuiava.

For many students, finding an ideal career can be difficult, but Fuiava is confident in his aspirations. “When I get older, I want to be an electrician and play volleyball as well. I like doing wiring and electrical things because it brings joy to me and I feel that (it) would be the best (way) to help support my family.”

After graduation, Fuiava hopes to spend his summer with friends before leaving to go to a college in California. Through the support by others, Fuiava will continue to play volleyball for God and his family wherever he goes, brightening the days of others and showcasing skills he’s gained from playing sports.