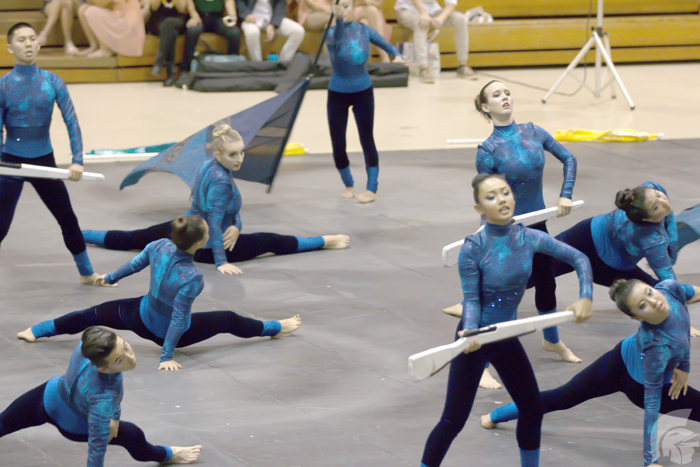 This year’s annual MHS Springfest, held on April 2 at the MHS gym, hosted a variety of Oahu high schools including Castle, Farrington, Kamehameha, Kapolei and Pearl City.  The event allowed schools to showcase their winter lines, guards and corps through unique performances.

“The purpose for Springfest is for all the drumlines and guards that have been working throughout the season to put forward a show for the audience. Along with that, (the) performing is also for the students. Having the best performance you can and exciting the audience is the drive for some people. I guess all performances are like that, but what makes Springfest different for us is the fact that it’s on our campus. It’s a different experience because the people who come are (from) the community and those who care, you want to show them a good time,” said front ensemble marimba Junior Cade Yamashita.

This year’s theme, “The Box,” was centered around the idea of Pandora’s Box, an idea first used in 2015. “The show is thematically different in the sense that the box is a metaphor for war, which is stated in the voiceovers, and the show focuses on how when war is unleashed and there is fighting, the innocent people—young or old—are also impacted. As said in the show, ‘No one is safe from war.’ In ‘Pandora’s (Box), it’s more about there being hope despite all the bad things in the box,” said Yamashita.

Despite the similar goal of presenting music to an audience, the band, orchestra and winter line, guard and corps each offer different perspectives of art. “Winter line, or all the indoor groups for that matter, focus on more of the performance and visual aspect, compared to band or orchestra. The audience has the visual performance to supplement the music, which adds a different dimension to the program,” stated Yamashita.

Performing in the Winter Guard and Line, students committed much of their time and efforts to perfecting their performances. “Lots of practices took place in order to put on this show. We have had many long all day practices both after school and during the weekends. We were constantly trying to make our show the best it could be. I just want to give a huge thank you to (Derek) Kaapana and Susan Segawa for their countless hours put into making this show happen. They are the reason we were able to do so well in this (performance),” expressed Winter Guard Captain Senior Justine Liu.

In addition to the dedication, performers also gained new skills and experiences throughout the entire winter season. “From being in a program such as this, I think you get important lessons on working towards a common goal and how to work hard at something. I think I have learned through my time how to put something above myself as a single person, we each get a part to play in the show, and no matter how small it may seem, every part matters. It helps to learn pride in a way, to care about what you are doing,” stated Yamashita. “Obviously another thing you get to experience is the social environment, it would be impossible to get through a season and not interact with others, at least I think. It helps to know how to work with others, not like I’m an introvert, but you can certainly get to know people.” Winter Guard A performer Junior Adrian Pulido added, “Through these programs I’ve learned basic skills and techniques like how to perform better, play better and spin better, but I think there’s more to it than that. Being in these ensembles has taught me how to work better with others, people that I wouldn’t usually work with. I’ve also learned how to listen to others, and to sort of lower myself so that others can take a leadership role. Overall, it was a great learning experience for everyone.”

After performing at Springfest, the MHS Winterguard, line, and corps moved on to compete at the Winter Guard International in Dayton, Ohio, on April 8. There, they placed fourth out of 134 schools from across the nation.