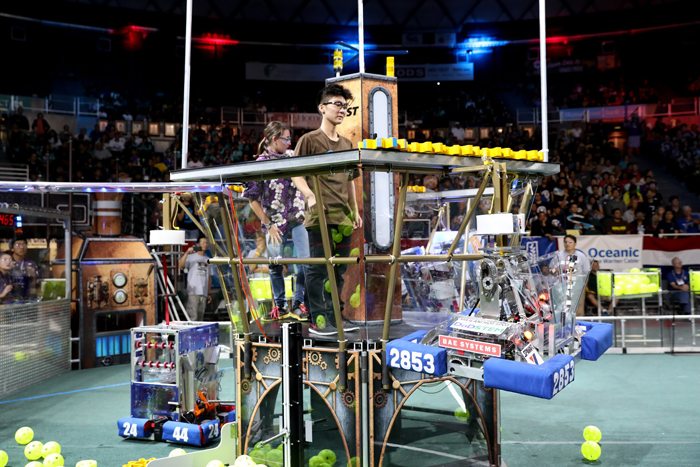 (Photo courtesy of Tyson Kikugawa) Evan Takushi (10) stands with the MHS First Robotics team’s robot that they competed with and assembled and programed within six weeks.


The MHS First Robotics team participated in the state competition held from March 29 to April 1 at the Stan Sheriff Center, where they made it to the quarterfinals. With new members on their team and a more student led organization, this competition gave the students an opportunity to utilize and strengthen their skills.

“During the first couple of qualifications, we did really well. We built the robot to deliver gears and hang, and we were able to do that. It was especially exciting because we had tried to hang before last year, but we were never successful. However, our robot started having connection problems and sometimes if it was working and we got bumped, it would lose connection. So for the rest of the first day of qualification matches, we were in and out of connection. Additionally, our robot will climb a rope and hang using a winch, which is kind of like a yo-yo, and part of that bent,” said Senior Jessica Jones.

The high stake competition brought both success and some issues to improve upon in future competitions. “Robot performance wise, we did run into some communication issues and we found that it was just because of a few loose connections, so like if we could just go back and, knowing what we know (now), if we could’ve gone back and just kind of fixed it when it first happened, I think we would’ve done a lot better. I mean with that said, we still did pretty well, but otherwise, that would be the only thing. Everything else went much more smoothly (than) we’re used to, so we’re pretty happy with ourselves,” said First Robotics Adviser Tyson Kikugawa.

The competition lasted for a few days, wherein the team remained steadfast in their work. “Once we had finished (working) on our robot it was taken to inspection to ensure that all aspects of our robot were within the rules given to us at the beginning of the season,” said Senior Orion Sun. “Upon passing inspection, we entered into practice matches to acquaint ourselves with the official playing field and practice competing with and against the other teams. The second day was the qualification matches (where) they match up teams round-robin style for 11 matches per team to determine a ranking for all of the teams. These qualification matches continued to the beginning of the third day. Once the rankings were set, I went onto the field as a team representative for the alliance selection process. During this, the top teams would select two other teams to be on their alliance for the elimination rounds. The elimination rounds only counted which team won two games first and would proceed onto the next round.”

The team was given a six week window in which they had to assemble and program their competition robot. With the limited time, students also learned how to effectively fulfill their roles in preparation for the competition. “The drivers get practice with our practice robot and the pit crew will practice working together, trying to foresee problems that might come up so that they can get prepared for that. We have our business and graphics team preparing all the PR stuff, like buttons to hand out to teams. And then just working on scouting, looking at how some of the competitions are going  to kind of get a feel for what might happen at ours.” said Kikugawa.  Jones added, “I think everyone was tentative about how we would do. Throughout the build season we made a lot of mistakes and ended up being behind schedule, so the mechanical and electrical teams had to make up for lost time and they did this by creating a strict schedule so we could get the robot in pristine condition by inspection. Last year we were the last team to get inspected, but this year we were one of the first.”

Proud of the dedication and results, the competition was a success for the First Robotics team. They hope to learn from the issues and obstacles that was brought to their attention to better their skills for the upcoming years.