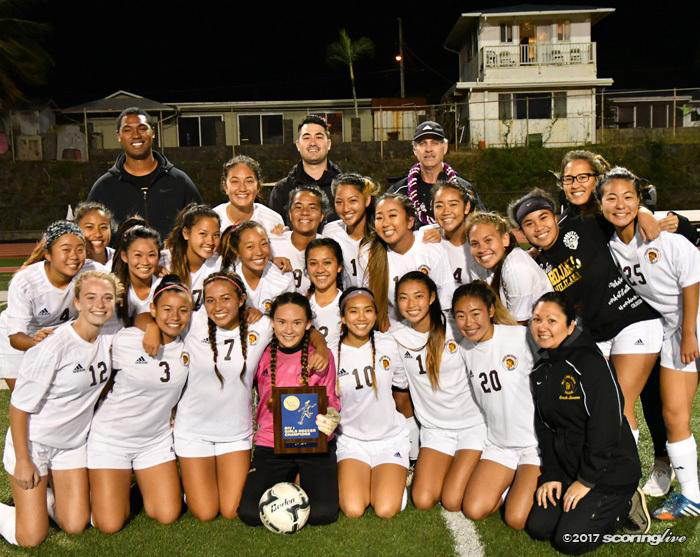 On Jan. 24, the MHS Girl’s Varsity Soccer Team won their Oahu Interscholastic Association (OIA) Championship game against Pearl City with a score of 1-0, securing their place as OIA champions for this soccer season. Their remarkable hard work and supportive nature led these girls to qualify for the state championships and created a strong bond amongst the team.

“I would not change a single thing (about the game). Soccer is such a continuous flow of plays that if you tweak (one) teeny tiny thing, the entire course of the game changes and you know, I think everyone is rather happy with the current result. We’re going to keep improving for states, of course, but (OIA) is something we can look back at with only pride,” said Captain Center Back Junior Karlin Wurlitzer.

The championship game had its fair share of nail biting moments, but the Lady Trojans were able to come together and secure the win. “It took me a while to realize I had scored. I didn’t actually see the ball hit the net and I thought everyone was cheering because the keeper made a nice save. But then my teammates ran at me and I thought, ‘Wait, oh my god, I think I scored!’ And after all the celebrations, I was feeling happy that I could help the team, but also we had a renewed focus on keeping our defense strong,” said Wurlitzer. Goalie Junior Andrea Kenagy added, “In the beginning it was intense. Both teams were going after each other for the win to get the OIA title and to get a first round in states. After we had scored, we relaxed a bit and played more defensively. I was very comfortable, even the commentators who interviewed me after the game said that I looked very comfortable.”

The team shares a bond that can be seen on the field, but it  also shines through when preparing for their games. “Before every game we have a ritual. We go in a circle and hold hands. We close our eyes and visualize what needs to be done in the game (and) take as long as (we) need to be mentally prepared. Once everyone is done we do a heartbeat where we squeeze each other’s hand and it (goes) around the circle and we have a goal to do it under three (seconds). It helps a lot to getting us all on the same page and ready to play,” said Captain Center Midfielder Junior Tayzha Furuta. Wurlitzer added, “We all have our own little pre-game rituals (that) we do on the bus and before warm-ups. Most listen to music, some braid their hair, some go to the bathroom like a hundred times. Then we all come together, focus on having a good warm up and try to treat it like any other game.” Kenagy added, “We prepared for this by taking lots and lots of penalty kicks. Winning our quarter finals by me blocking three of the four shots and my teammates making their shots. We also have done lots and lots of conditioning so that we could play these games which have paid off with this win.”

The immense support system for the girls includes their coaches, teammates and family. “I come from a community and environment where everyone around me (supports) me in what I do. I know that they’ll (always)have my back. Basically, my team is like family. We hold each other together and keep everyone from falling,” said Furuta. Kenagy added, “Many people have supported me throughout the years. Being originally from Maui and moving here my freshman year, my parents, sisters, coaches (Coach Ray, Coach Vern and Vic) have pushed me everyday to become better and never let me become less than what I am capable of.” Wurlitzer added, “Soccer is a giant community. Besides obviously our coaches, who push us to be our best, you have the club teams of all the players who come and cheer us on at our games and send us encouraging words all the time.”

The varsity girl’s soccer team also played in the Hawaii High School Athletic Association Championship which was held at Waipio Soccer Complex on Jan. 31 and Feb. 2 to 4.