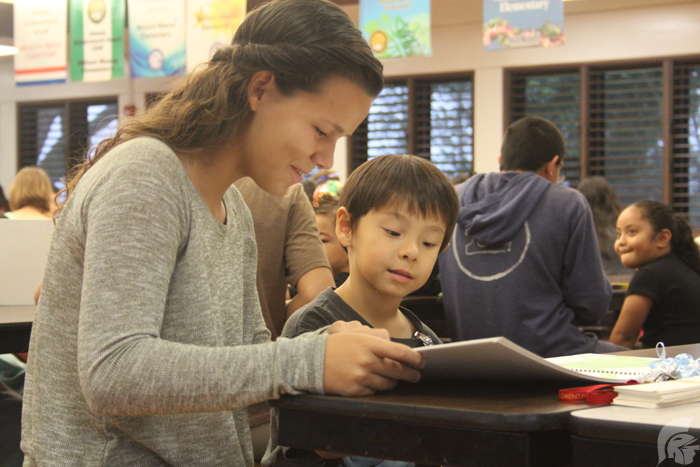 Many projects are assigned during the holiday season, including Pre-AP English Teacher Steven Schick’s annual children’s storybook project. On Dec. 8, Schick took his Pre-AP English class of ninth graders to Waena Elementary to give out their handmade storybooks, leaving a big impact on the kindergarteners and freshmen alike.

“(One year) there was a very well response from a kindergartener’s parent. I received an email from the kindergartener’s dad asking if he could have permission to get in touch with my student—this was after the project was over—to thank him. And I thought, ‘Sure, that’s a nice thing,’ but what I didn’t know was the depth of it and this is what the project is all about,” expressed Steven Schick, who has been conducting this project with Pre-AP English students for nine years at MHS.

Adding onto his story, Steven Schick went on to reveal,“But the cool thing about it was that the kindergartener—from what I heard from the dad—refused to go to bed unless he could take his book to bed with him. I still tell that story to all my classes to (emphasize) the impact that this book could have if you do a good job. It’s so important because what we’re dealing with here are emerging readers and so it’s absolutely essential that their first experiences with books be really positive.”

What makes the book unique is entirely up to the students, who don’t meet the kindergarteners until after the project is finished. “The way we work it is each ninth grader is paired with a specific kindergartener and the book is dedicated to that kid and we have interaction between my kids and (Waena’s) kids prior to the book. We do this thing called a ‘Guess-Who’— an informational page about your likes and dislikes. We send one with (the ninth grader’s) photograph attached so the kindergarteners will be prepared for the visit from the big kids,” Steven Schick explained, “Most importantly, my kids get to see pictures of and get a message from the little kids which encourages them to make the book as perfect as possible.”

Not only is the project special to the young students at Waena Elementary but also to Steven Schick, whose wife, Marlene Schick, a kindergarten teacher at Saint Andrew’s Prep, came up with the project idea. Steven Schick explained, “The first time we did this project I only had one class of ‘Squeakers,’ (then) known as the ninth grade GT (gifted and talented), (and) now known as the ninth grade Pre-AP. But I only had one class back in those days and she only had one class of kindergarteners, so we decided on this project together so that my kids could go on a field trip to play with her kids, and that’s how it started. We did that for a few years then the Pre-AP program started to grow (and) we couldn’t work with my wife’s kids anymore, so we switched it over to Waena Elementary.”

With a project, teachers want to provoke complex thought and creativity within their students. Junior Stephen Kang, a past student of Schick’s Pre-AP English program, explained the thought he put into his storybook, “It was a story that emphasized family (and) was made out of felt and had puppets, (and) I sewed the binding together. I just thought about what I valued the most and what I would like the kid to learn about, so I decided to focus on family. I thought about the project the moment I got it; I kept editing it so that I could give my kid an appropriate and presentable book.” Freshman Alexander Babcock, a current student of Steven Schick, was inspired by his family as well, explaining, “For this story I got my inspiration from my brother (Senior Evan Babcock). He was the one that sparked the idea of family. I realized how grateful I am to have him; after that the (storybook) just flowed easily.”

The reason behind this assignment is the conducting of project-based learning. Steven Schick explains, “It’s a philosophy on how to teach where you enact the standards in such a way that the project covers multiple standards, but most importantly (it gives) it a real-life component to it; that’s really important because it’s through giving that real-life component that kids do their best work.”

Alexander Babcock also expressed his view of the importance this project has, “I believe that Mr. Schick assigned this (project) to encourage young kids to be young readers. Not only that but also to give us an assignment that we have no choice but to give 100 percent effort because this project is not only about our grade, there is an anticipating kindergartener on the other end expecting something spectacularly magical.”

As this annual project continues on to its ninth year, Steven Schick and his class of Pre-AP English freshmen continue to show Christmas spirit implementing inspiration in the hearts of Waena Elementary School kindergarteners; sparking an interest in reading and an appreciation for creativity.